Piper has this silky. It has been with her since she was 4 months old and since then she has NEVER left the house without it. It is her everything! So I wanted one for Thaddeus and my mom made him two for Christmas. But apparently Pipers pink silky is better cause he steals it every chance he gets! He carries it with him from room to room. Well I guess drags it is more appropriate. These pictures are before Piper spots him. 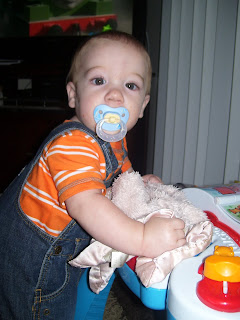 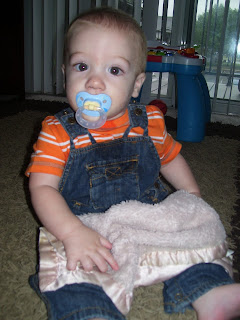 She sees him with it. rips it from him, tells him it is her silky and then being the nice girl she is will go get his and give it to him and tell him "That is your silky, this is mine, OK?" 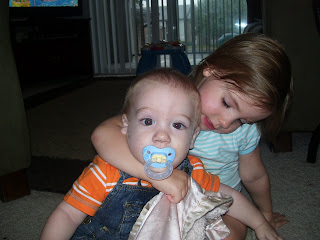 This picture isn't as bad as it looks. She wanted to take a picture with him and he wanted to camera so she was trying to hold him in the shot, but it looks like revenge! But I couldn't let people think my daughter was chocking him and I was letting her and didn't put down the stupid camera to save my sons life. Yes I am the paranoid! 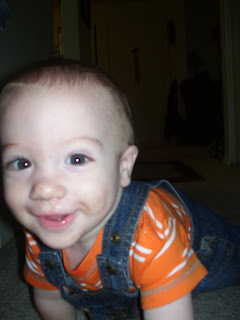 This is to show he ins't traumatized by the event. This takes place about 50 times a day. It will be a fight to the death for that stupid piece of fabric! 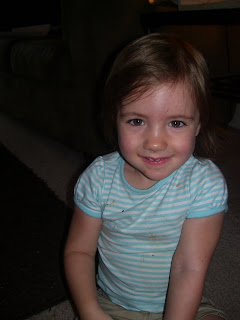 Piper is sweet. There are just some things you can't share with your younger brother and the cherished silky is one of them! She did share the brownie she just ate with him though. It is hard for her to understand when I tell her to share everything with Thaddeus except her brownie! 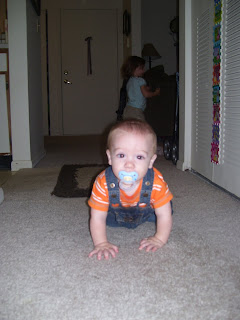 OK So one more thing about my gorgeous son...... He will be 8 months old on Saturday and the other day I saw him climbing up onto my daughters bed. I have a footstool for her to help her cause it is so high off the ground. Well I look down the hall and Thaddeus is standing on it with one foot and with his knee, trying to get on the bed! WHAT! And he was walking along the couch the same day and let go and just stood there. When we tried to take a step he fell (thank goodness) but what 7 month old does that!!?? Apparently my super babies! Why do my babies have to grow up so fast! If he walks before Piper did at 10 months I will be so mad!!!!

That's crazy Nikki! Tyler isn't even crawling yet. He just kind of scoots a little bit. Thad's a go-getter!

I loved the choking picture! LOL It was totally classic and definetly worth the picture! You must have super babies. Mine didn't walk until after one year.

James steals Alesy's Bo Bo and she flips every time(I think he doesn't cause he knows she will squeal and I will react). If it wasn't for that they would be happy all the time...wait no Alesy is constantly stealing James' toys when he looks the other way and eats his food when he isn't paying attention. They are hopeless but they love each other