So I am half way! ALREADY!!! I had a doctors appointment the other day. No talk of an ultrasound in the next month. My doc does two ultrasounds during the pregnancy. One at the beginning, around 15 to 20 weeks, then one around the 30 to 35 week point. I had one at week 14 to see how far along I was so I don't think he plans on me getting another one for about 10 more weeks. If we wait that long to have one we might as well wait to find out the gender! We are also still pending on our insurance. So if we end up being denied coverage we wont get another one cause we cant afford the one we already had. 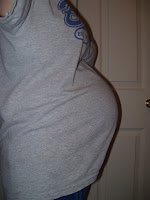 At my appointment, it is routine to have the doctor hear for the heartbeat. Well he puts the wand on my belly and we hear silence. He doesn't seem worried, he just keeps wondering around my belly looking for the heartbeat. About 3 minutes later and no luck, he starts to get concerned and checking his charts and asking me questions. So I start to get worried. I freak out about losing the baby ALL THE TIME! I thought, this is it. I lost another baby at 20 weeks! I had Piper with me so I was trying to smile at her. She was already worried cause he was touching me (she doesn't like people to touch me) but inside I was screaming and freaking out. Finally he said, "lets check lower on your tummy before I send you to the hospital." As soon as he put the wand on the lowest part of my uterus HE FOUND IT!! She/he is buried deep down all snug! The heartbeat was 150. Strong and loud and healthy. So after the heart attack, my baby is still kicking! I don't know why I was freaking out so bad, OK I do, cause that nightmare came true once, but I felt the baby move when I was waiting for the doctor to come in the room. I think the concern on his face, started my concern. Usually when the doctor gets worried, it is time you start to worry! She has moved a lot today, so I think it is her way of telling her mommy "It's OK mommy, I'm here, relax already!" 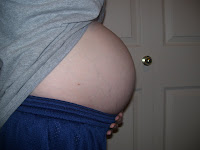 I did gain 6 pounds in a month. I had only gained 4 up till my 16th week. Darn you Pumpkin Chocolate Chip cookies!!!

That's a total bummer that you'll have to wait so long! At my appt the other day I had to turn on my side for her to get a good look/listen to the heart. These babies just want to make it hard on their mommies! They probably planned it all out.

They didn't do a weight check at my appt, and at my 14-wk appt I hadn't gained any weight. I'm freaking huge, though, so I'm curious to see how much I've put on.

Oh my goodness Nikki. That's scary! I'm glad to hear everything is okay though. Phew!

Nikki, I'm glad everything turned out ok! I'm sure that's got to be torture for you when the doctor looks concerned! I have no idea of that feeling, but I can only imagine it's torture.
Too bad you didn't get another ultrasound, you could have found out the gender! haha
you are wonderful, and your babies are so blessed to have you and Sam as parents!

Yikes!!! What a scary moment! I'm glad everything is ok. You look great and I'm excited to see you have the baby. I found out the gender for all of mine except London but it was so awesome! Being surprised is the most fun!!!