So I took Sam to school and the kids and I were off to Wal-Mart. I have been asking Sam what he wanted and he would just say "get what you want and say it is for me" so, I did. I took Piper down the toy isle and told her to pick something she thought Daddy would like. Well she came up with a Blueberry Muffin doll. (A Strawberry Shortcake friend) OK Pipers gift is done. Thaddeus "chose" a $5 Don't Spill the Beans game. Then Piper said "What about Odessa?" So Odessa then "picked out" a Raspberry Torte doll (another SS friend). Then I was one my way to get a disposable camera so I could document the event and then got very selfish. They had their cameras on sale. So I bought a new camera. Which is ridiculous cause we have absolutely no money, but I couldn't stand the thought of have not having pictures. Not just for Sam's birthday, but for Christmas, Thad's birthday, my birthday, Odessa's birth, Piper's birthday, etc etc! It was totally selfish and I will have to pay for it over and over agian, but it was worth it. So anyway, I have pictures to document the love of my life's 27th birthday! YAY!! 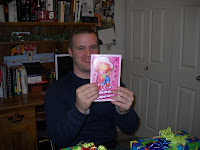 Piper picked the card. Surprise huh? When you open it, it sings some crazy song with the line "you're an awesome little girl". Thaddeus loved it! He would open and close it for about 20 minutes and just laugh! 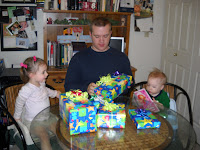 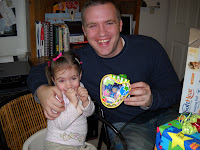 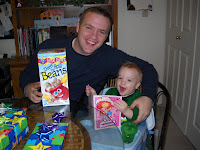 Thaddeus's present! You can tell his love for the card in this picture! His face looked like that for 20 minutes! 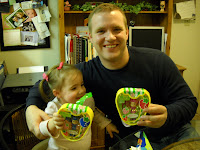 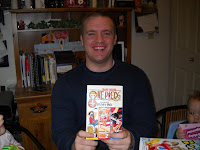 Sam's present! He finally got one he wanted! It is his favorite comics. The first three books in one! 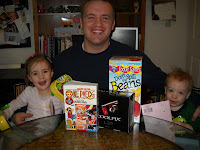 All the gifts. Sam hasn't seen a few of the presents since he opened them, but we expected that! 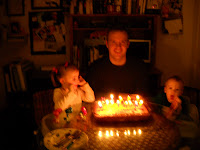 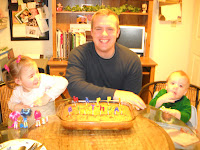 What a handsome 27 year old! 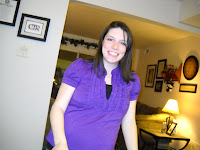 You got the same camera I did! I love it! happy Birthday to Sam!

BRILLIANT! I believe I will be doing the same for Matt for Christmas!

I totally love you so much. What a great blog, and I'm SOOOO happy you bought a camera! No one with babies can go without one. The pictures are great, your story is great, every day I can't wait to check you and Alyssa's blogs. Love 'em!!!

You go girl! Gotta have a camera so you can keep doing such a great job scrapbooking! You have alot of material! Looks like the party was alot of fun and I love the presents the kids chose for Sam. Too funny!