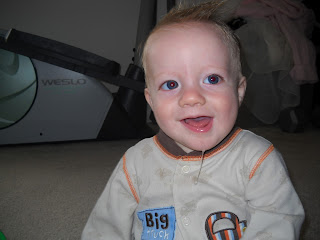 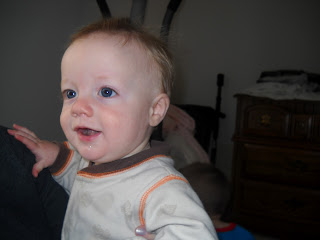 He eats about 16 ounces of food and a piece of bread 3 times a day and nurses 5 times A DAY! Which is a shock! I have never nursed longer than 6 months!  He looooves bananas and anything he can pick up and eat himself.  He can also hold his own sippy cup and take a drink! He amazes me. He is almost doing things as fast as Piper did!! AAAHHHHH! Please don't grow up as fast as Piper did! PPLLLEEAASSSEE!!!! He can pull himself up on things, but can't stand unassisted, so thankfully he doesn't stay up long! 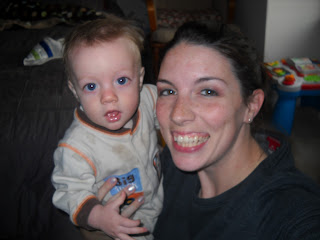 He is starting to show signs of, what we affectionately call, the "Odes syndrome". He cries when I leave, he cries if he sees me and I'm mot holding him, he only wants Mommy to feed him, etc etc etc. Odi is doing fantastic with letting me feed him and hold him if he cries, but Ace doesn't want to share as nicely as Odi does.  Thaddeus was very attached to me and it started about this age to. I love me some Momma Boys! 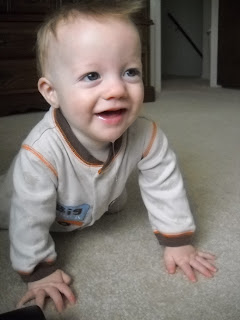 Acey is a crawler. He is still slow, but he does get where he needs to go. I used to leave him on the floor, switched the laundry and would go back to him but he now meets me mid-way threw the laundry.  I love the face he makes when he finally reaches me! 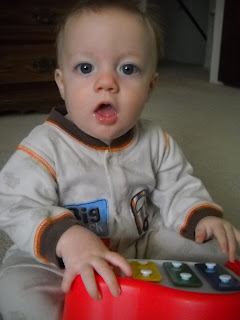 I always teach our kids "Dada" first. If that's the only word they know, they will only use that one and when they call Dada I can tell Sam they want their Daddy! Brilliant plan right?  well anyway, Acey can say Dada! I will teach him Mama, later.  He talks up a storm whenever it gets really loud. He just wants to be heard, I guess, amongst all the others 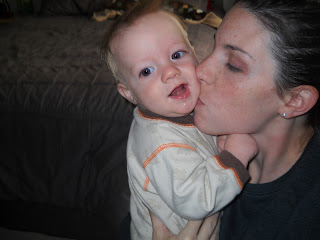 I am so in loooove with this little guy!