.......Sambo and I had out first date.
He called and asked me to out and I pretended like he couldn't hear me and said I didn't want to go but that it was a free meal so why not, then I came back on the phone and told him yes. Thankfully, he knew I was joking and still agreed to take me out. He then took me to a play that one of his crushes was staring in. But to my surprise we were actually having a good time. We had great conversation and lots of laughs. Then he took me to dinner at On the Border. Dinner was good but we did heavier talking than I wanted. That's cause it consisted of my baggage I had from being a divorcee. By the end of the night, Sam had decided that we should "just be friends" Yeah that hurt, but I wasn't really interested in dating or even looking at any guy at that time, so I thought it was alright cause I wouldn't have to break his little heart by breaking it off later once he got to attached. 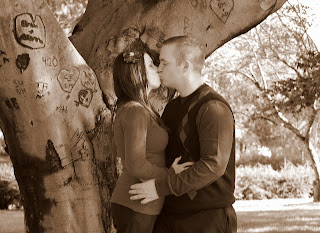 Shortly after he tried hooking me up with his friend. Poor Kevin wasn't strong to handle me but Sam thought he was able to tackle the challenge that I presented myself to be after a while. (Yes I was a huge mess, lots of baggage and bitterness and hatred towards a lot of things) anyway, Sam was right and he could handle it. We had our ups and downs and our first year of marriage was A LOT of fighting and figuring it all out, but now I wouldn't change ANY OF IT! I have found my best friend, lover, confidant, and the best father I could have chosen for my children. I am so glad I said yes to his invite and that he was able to ignore all my sarcasm. 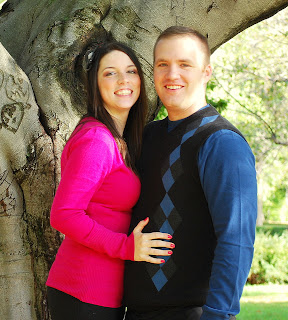 I love you Sambo. Thank for loving me!

Sounds a lot like our first year...lots of fighting! Sad to say it was all my fault...only I had no baggage...what a jerk I was!

Great story :) Love's pretty powerful stuff. I'm so glad you both found the joy and happiness you deserve, not to mention your three beautiful children.

I love to hear stories like this of how it all began! We can't wait to see you guys!!!...very soon!!! Love ya and Merry Christmas!