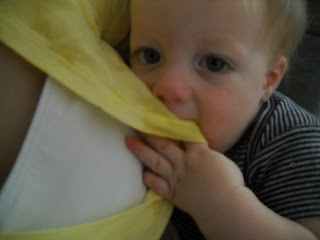 Acey is not big on his pacifier, but he loves to take his thumb and suck on it with my shirt. Piper used to do the same thing til I got her a "silky" and she still does it with her silky. I have caught him asleep in his crib with his blanket shoved in his mouth with his thumb. Acey and Piper have so many little things like this in common. Piper constantly moved in my tummy and I don't think Acey ever took a break either. They were both 9 pound babies. Both nursed. Both love to play with my hair and wrap their fingers in it. Their temperaments and attitudes are pretty identical as well. At least I know what to expect from Acey I guess?