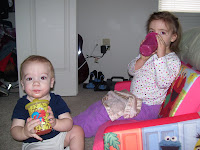 When Thaddeus sees Piper with a sippy cup he goes crazy! He HAS to have one to! He will follow her around pull on her, scream at her, stand on her, tackle her, whatever it takes to get that cup!
He will chug the cup till it is dry! Then go after Piper again for hers which still has something in it. He eats more than her, drinks more than her, and Piper has never been a terrible eater. She will eat me under the table when I am 7 months pregnant! ( Almost ties Sam!! ) 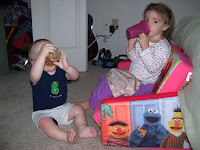 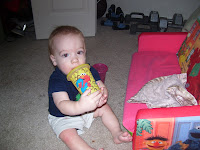 Piper actually took this picture. That is why she is missing. It took me about 5 seconds to take all the pictures and by that time Thad had finished his drink. He is getting better with it so he actually drank most of it, just a few drops fell ( on my carpet!! ) It was only half full, but he chugged it fast!! It is dehydrating crawling, and standing unassisted, and trying to walk!
( Did I mention he is only 8 months old!!?? )

Our big boy! It does take a lot to maintain all the energy a growing boy needs!

I miss Thad! I am coming over to smell him and hang out with you. I may steal him when I leave.

Ryan and London are always stealing sippy cups from each other too! I can't believe he is standing! Yikes!!! You will really have your handsful when the new baby comes.

Hey Niki! Found your blog from Laura's. Love the pictures. The kids are so cute. My blog is private. Email me at brandikoch@gmail.com and I will add you.