WHAT WAS I THINKING!

When I was little my sister and I had these toys that when you pushed a button they would say "Peek-a-Boo" and I think the other one said "Momma, Momma" (but that one was Kelli's) My mom still has them. Well we just got them and we wanted to take them to church to play with, but my mom warned that if we pushed those buttons and made them go off we would be in trouble! OK so sacrament is coming to a close and mom is gathering up all our toys and she grabs Kelli's doll and it goes off. We were in a small ward so everyone heard it and of course my family always sat in the second row! My mom about died! I am just glad that it wasn't me that pushed the button. OK - So I told you that story to tell you this one.
On Saturday I went shopping with Piper and I had a $10 off coupon any purchase. SO Piper and I went looking for a few things. Piper spotted the Clarisse doll (Rudolph's girlfriend in the Rudolph Christmas movie made in the 50's). It was $20, then it was on sale for 40% off which made it $12.99 and with my $10 it was only $2.99. Our rule is it has to be $2.00 or we can't get it, so lucky Piper got it. Well she hasn't let it go since and she has been watching the Christmas movie so that Clarisse can see it. Anyway, so she wanted to bring it to church and I told her NO cause she would push the button and if I learned anything in my childhood it was not to bring toys that make noise. It turns out I had to run home in the middle of sacrament to change my blouse, and I was going to get Clarisse and put it in her car seat so it was waiting for her when she got out cause she was asking for it and crying for it and it made me sad. But Sam called me on my way back to church and told me to bring it in, that she had to have it. I told him I don't think it was a good idea, but did it anyway. So 10 minutes, 15 minutes, still no Christmas music. I take my eyes off of her for 2 seconds and the Christmas music starts. Lucky we were sitting in the back by a door and I snatched it up and ran for the door! Then of course Piper followed me screaming for her toy making a bigger scene. I yelled at her and told her why I was so upset . She apologized, told me she wouldn't push the button anymore so I gave her a second chance and she never touched it again. She would even turn to me and say, "Mommy, I am not going to push the button." I guess it is inevitable. It probably wont be that last experience either! 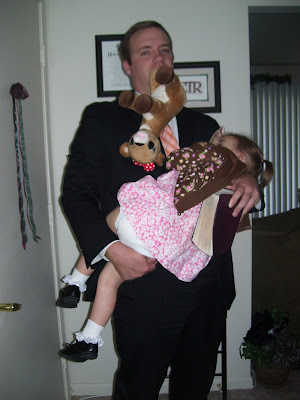 This was what we all looked like after that Sunday morning. It was just one of those Sunday's that tries your faith and makes you wonder why you even go to church at all with little kids. (There was a lot more things that made it bad, reference why I had to go home and change my blouse) Thank goodness for Nursery. I was looking forward to taking care of 10 2 year old's just so I could relax a little bit!

ABSOLUTELY WONDERFUL STORY!
The last time Piper and Kimmy were here they played with those little dollies! I can't believe they still make noise, but I hope when they stop we can replace the battery or whatever it is inside that makes them speak. Sam looks so cute with Clarisse. I'm so glad Piper has her, she will get a lot of fun out of her. Please tell her Meme loves her so much!

Sounds like a busy Sunday! What would we have to talk about without kids! You are setting a good example for those little ones by going to Church every week. Keep it up!